History of the observatory

A curiosity in Abbadia: all measurements are in decimal system. This may seem normal since we are at the end of the nineteenth century but it concerns measures of both angles and timings.


- For angle measurements, graduations are not in degrees but in grades (from 0 to 100 degrees instead of 0 to 90 degrees for latitudes). This system is not common on an astronomical instrument but is much more so on IGN maps. D'Abbadie defies the traditions of astronomers by thinking that he is ahead of his epoch.

- For the measurement of time, it is much more surprising: the clocks are not graduated on 12 hours but on 10! And one day is not 24 hours but 10 hours divided into 100 parts. This system proposed with the metric system at the time of the French Revolution, has never been used by scientists or by the general public. The change in habits was there too much. Decimal clocks and watches have been built but without success. Yet, nearly a century after the revolution, D'Abbadie still believed that the decimal system will eventually prevail for the measurement of time as well. The future will give him wrong. 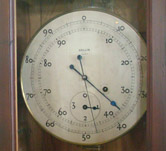 one of the decimal clocks of Abbadia
Credit : JEA

The decimal time was officially introduced in France during the Revolution by the decree of the 4th Frimaire of Year II (November 24, 1793) but was abolished in 1795! It should be noted that astronomers use a decimal time with the Julian period where each day is numbered from January 1, -4712 at noon and each moment noted by its decimal fraction of a day.